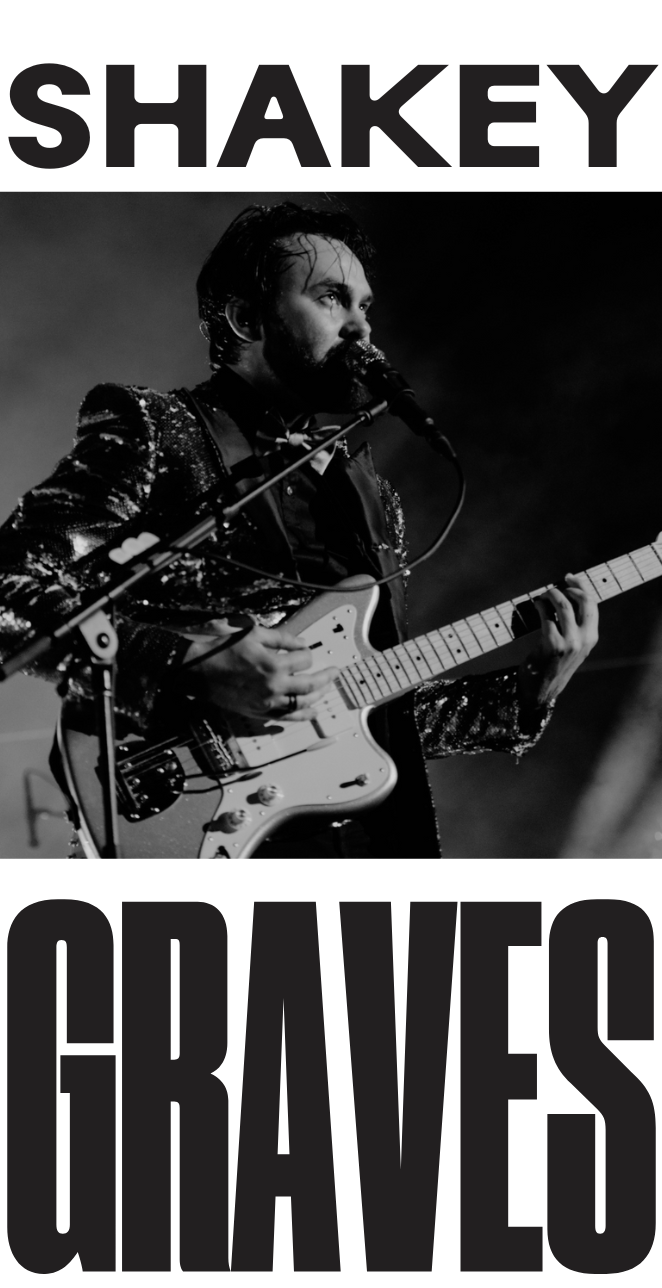 Shakey Graves, AKA Alejandro Rose-Garcia, is an Austin-born artist who’s music combines blues, folk, country, and rock and roll. Graves became known for his one-man-band set up, which originated after he grew tired of having to borrow kick drums and high hats in order to perform. His solution consisted of a modified suitcase that functions as both a kick drum and a tambourine stand built by a close friend. His unique style of performance led to him being asked to be the official “busker” for the Edward Sharpe and Mumford & Sons Railroad Revival Tour in 2011, where he played music for patrons entering each venue. Shakey Graves won the Best Emerging Artist award at the 2015 Americana Music Awards. In 2021, Graves re-released his debut album Roll the Bones through Dualtone Records to mark its 10th anniversary, including 15 additional tracks. Along with its deluxe vinyl emergence, Roll the Bones is available through all digital streaming providers; for the last decade, the songs have lived exclusively on Bandcamp. This full-spectrum digital release arrived concurrent with Shakey Graves Day, which was minted on February 9, 2012 by Austin Mayor Steve Adler. Year one, Rose-Garcia spent what he calls his “alter ego’s birthday,” as an excuse to go play laser tag. Ever since, he’s used it as an occasion to stage intimate pop–up shows and open up the attics of his discography, making all of his albums, plus hundreds of unheard songs temporarily available for free. “I’ve used Shakey Graves Day as a challenge to myself,” he assesses. “I make so many random songs throughout the year that I either forget about or I’m too nervous to put on an album and it becomes a clearinghouse for that. It surprises me when people tell me that something released that day is their favorite of my stuff. In a larger sense, it builds off what I initially did with Roll the Bones – which is give it away for free.” Graves continues to tour, and, on May 31, 2022, appeared on Jimmy Kimmel Live!, performing “This Town” with Trixie Mattel.