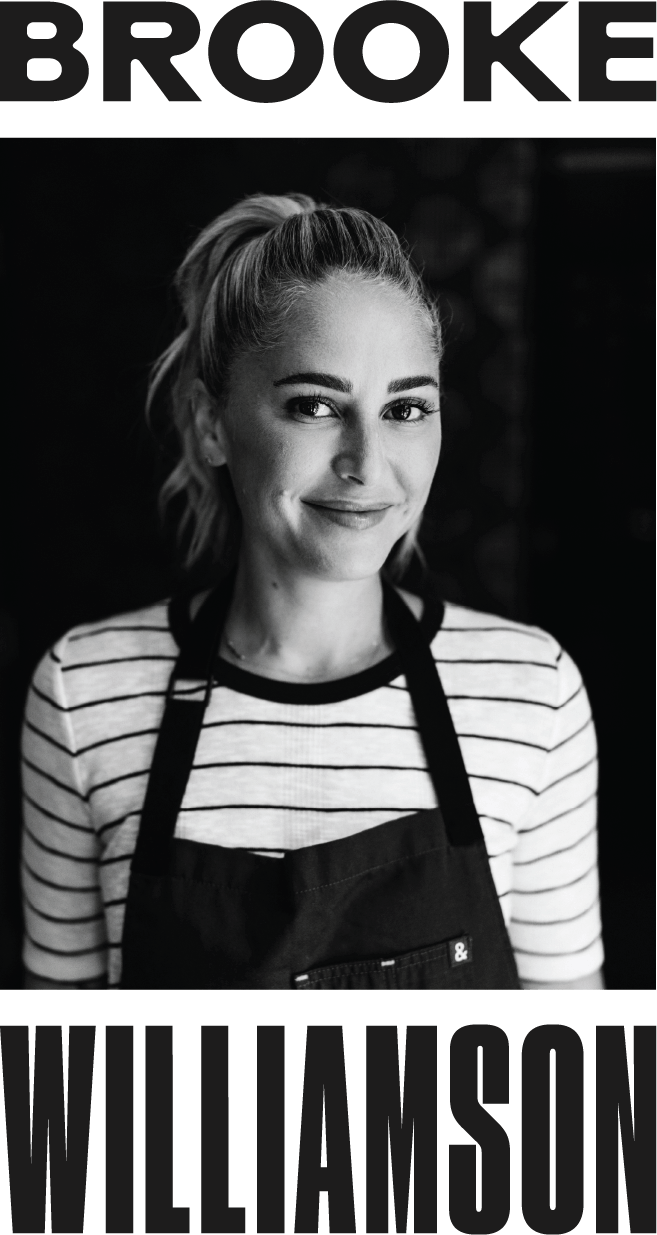 Born and raised in Los Angeles, California, Brooke Williamson has carved out an impressive résumé full of leading roles and professional achievement, such as being the youngest female chef to ever cook at the James Beard House, winning Bravo’s “Top Chef” Season 14 in Charleston, and most recently, being crowned the first winner of Food Network’s “Tournament of Champions” in spring 2020. Although officially beginning her career at the young age of 17, Williamson always wanted to be a chef for as long as she can remember. “I love creating things that make people happy, and I’ve found that food genuinely does that,” she explains.

Williamson began her culinary career as a teacher’s assistant at the Epicurean Institute of Los Angeles, followed by securing her first kitchen position as a pastry assistant at Fenix at the Argyle Hotel, under the tutelage of Michelin-starred Chef Ken Frank. Her undeniable star quality and concentrated creative energy brought her to Chef Michael McCarty’s nationally acclaimed restaurant Michael’s of Santa Monica, where she worked her way up from line cook to being their youngest sous chef. Desiring to travel and experience other restaurants, Williamson later staged at the renowned Daniel restaurant by Chef and Owner Daniel Boulud in New York City. Two years later, Williamson was appointed her first executive chef position at the notable Los Angeles restaurant Boxer. Following that, she opened the Brentwood eatery Zax as Executive Chef, where she began to develop her signature California-inspired cuisine—infused with local ingredients, global flavors, and centered around the idea that simplicity goes a long way. While at Zax, she also met her husband and business partner Nick Roberts.

The two opened their first independent venture together a couple years later, Amuse Café in Venice, followed by Beechwood restaurant soon after, earning them the title of “Rising Star Chefs” from StarChefs in 2004. Although both are now closed, in 2009, the wife and husband team opened Hudson House, an elevated gastropub in Redondo Beach, followed by The Tripel in 2011,  a modern American and craft beer dining destination in the neighboring beachfront community of Playa del Rey, which closed in the summer of 2020. In 2014, the culinary couple debuted a unique four-in-one-concept, Playa Provisions, featuring a grab-and-go marketplace, King Beach; an artisanal ice cream shop, Small Batch; a seafood dining spot, Dockside; and an intimate whiskey bar, Grain. From 2015-2020, Williamson and Roberts owned and operated Tripli-Kit, a culinary- focused retail store, selling unique kitchen gadgets, cookbooks, and other cooking essentials. The duo debuted their fifth venture, a fast casual, Hawaiian concept called Da Kikokiko in Playa Vista, celebrating Hawaii’s popular street foods, including poké, shave ice, and musubi, which closed in summer of 2020.

Williamson won Bravo’s “Top Chef” Season 14 in Charleston in March 2017 and a few years prior was a runner-up on “Top Chef” Season 10 in Seattle, which catapulted her career. She’s also participated on other national shows like Bravo’s “Top Chef Duels,” Esquire network’s “Knife Fight” (where she took home the win), MTV’s “House of Food,” and Food Network’s “Guy’s Grocery Games” and “BBQ Brawl” as a judge. During her day-to-day operations, she works alongside Roberts creating new menus and running the front and back of house, takes her chef talents on the road to local and national food events and festivals, and regularly participates in philanthropic efforts with No Kid Hungry.

When she finds time outside of her many ventures, Williamson stays active by running, bike riding, and playing with their son, Hudson.